In this digitizing world, many technologies are rapidly changing the way organizations carry out their work. In this web of technologies, it is important for IT professionals to know what the most emerging trends are for the coming year, so that the right added value can be derived from this for their organization. Supply Value has been conducting the IT Trends Survey since 2019. The purpose of this research is to support Information management and technology professionals in setting key priorities and proper focus. In the month of August we will work towards the 3 most important IT Trends for the coming year, by discussing the top 10 trends. In this insight, we share and consider the trends that have finished in sixth and seventh place: Internet of Things and Artificial Intelligence. 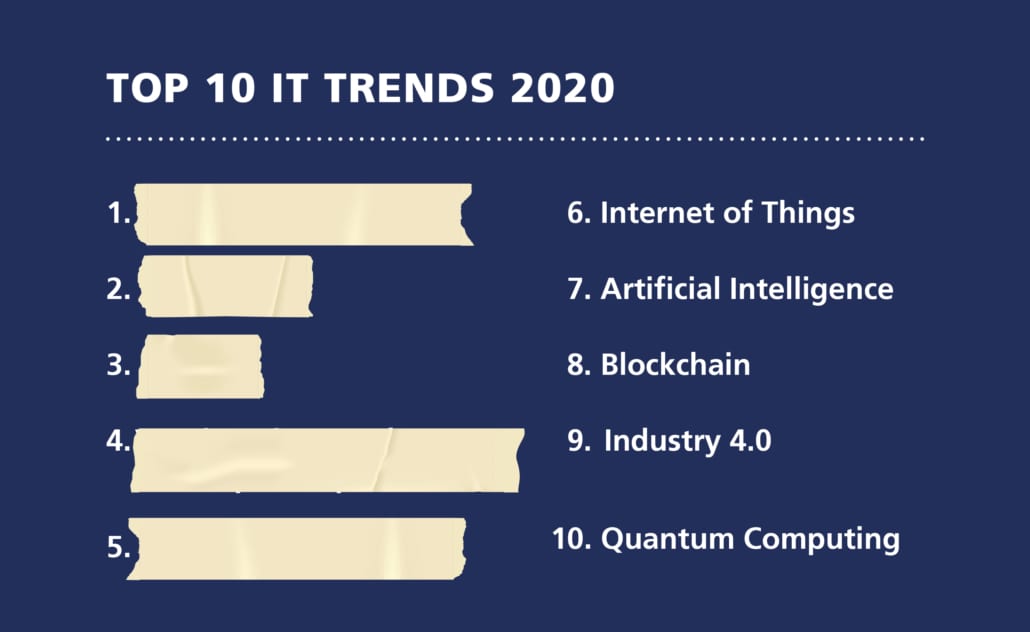 In the middle bracket we see the IT trend Internet of Things (IoT) again this year. Devices that are connected to the internet are therefore indispensable in our society. For example, consider GPS data that a device collects and translates into useful information on a screen. 75% of the respondents therefore indicates that they give reasonable to high priority to this trend in the coming year.

What is Internet of Things?

IoT (Internet of Things) is the collective name for semi-intelligent infrastructure, which can often measure and communicate this information by means of sensors. We see that increasingly devices act on this information without human intervention, because frameworks are given to the 'things'. An example of this is a flood defense that closes automatically when the water level rises to a certain level. 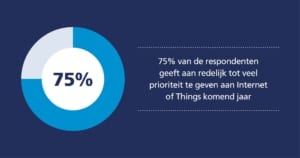 As a result of this development, we see a shift from isolated systems (such as a thermostat with which you can regulate temperature) to autonomous systems (such as a thermostat that is linked to the internet). In addition, we see a development that the human body is used as a data source (Internet of Bodies). Think, for example, of a smartwatch or pacemaker. IoT security is a major challenge here, because a breach can have direct consequences for the health or even life and death of the patient. Finally, no one will have noticed that 5G has really taken off this year. The first quarter of 2020 already showed an increase in our mobile internet data use of more than 34.5% compared to the same period the year before. 5G offers the solution for a fast and stable network and is therefore seen as an engine for IoT, because it can connect many more devices at the same time.

Trend development in Internet of Things

As last year, more than 70% of respondents are 'reasonably familiar' with to 'expert' in IoT. A slight drop in priority that IT professionals place on IoT next year will lead to a drop from fourth place last year, to sixth place this year. The trend of using IoT to make our lives easier, safer and more enjoyable will continue, making IoT increasingly part of our daily lives. For example, we are seeing more and more infrastructure applications of IoT, such as sensors in roads that can better regulate traffic. Because IoT sensors collect and share an enormous amount of data, which puts IoT security at risk, it remains important that this data is only accessible to authorized users. Therefore, perform a specific risk analysis with all stakeholders, before implementing IoT technology.

Artificial Intelligence (AI) ends in seventh place in the IT trends list this year. The development of AI has gone so fast in recent years that we hardly see things that are AI anymore because it is now seen as standard technology. Think, for example, of facial recognition by cameras or a spam filter in the mailbox. Nearly 70% of the respondents indicate that they give reasonable to high priority to this trend in the coming year. The forecast is therefore that the global investment in AI systems will be $98 billion in 2023, compared to $47 billion in 2020. It is remarkable that only 40% of the respondents indicate that they are 'reasonably known' to 'expert'. in AI.

What is Artificial Intelligence?

The term AI is present in many places and is often used interchangeably with Machine Learning and Deep Learning. AI is the collective name for technologies that make use of intelligence applied by machines. The essence of Machine Learning, a part of AI, is that a machine learns from events in the past, because newly generated data is additional input that can lead to other decisions of the machine. In Deep Learning, a specific application of Machine Learning, machines mimic the neural networks of the human brain.

AI technologies continue to evolve. Where Natural Language Processing (NLP) already provided a lot of convenience in our lives (think of Google Translate), Conversational AI (think of Siri) will take this to the next level. This development can help organizations improve customer service. We also see that organizations use Software as a Service (SaaS) platforms to be able to get started with Machine Learning easily and securely. Finally, hybrid models are used within Deep Learning, which ensures a large increase in the accuracy of the models.

It is expected that the applications of AI-based technologies will triple in 2021. In addition to the better-known applications such as Google Maps, which uses algorithms to determine the best route to work, AI has many other applications. There are many AI assistants that can take over administrative tasks, such as Cortana (Microsoft's AI assistant) that keeps track of your meetings and calendar and sends alerts where necessary. Despite this, we see a significant decline in AI in popularity this year compared to other trends, from place three in the survey in 2019 to place seven in 2020. Also, fewer than 25% indicate that they will give much to very high priority to AI in the coming year. , where that was more than 40% last year. The reason for this is that although we see many developments within AI technologies, there may be a shift in focus: AI only delivers real value when the preconditions are in order. For example, a good foundation with clear, clean, complete, current and well-secured data is required for the deployment of AI. Analyzing and calculating with data is not difficult, finding that data and developing that model that faithfully represents reality is the art of AI.

Has this insight made you enthusiastic about our IT Trends Survey? Put the notifications of our LinkedIn page then on. Later this week we will reveal which two IT trends have finished in fifth and fourth place. 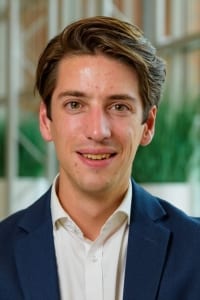 Case: Tender in 10 days with the Hague Purchasing Cooperation
Scroll to top