Since 2010, Supply Value has conducted an annual survey on the most important trends within the purchasing field. Since this year we have been adding the IT trends research. The aim of this research is to support Information management and technology professionals in setting the most important priorities and the right focus. In this blog we provide a first look at two trends of the research: Blockchain & Robotic Process Automation. Last week we published a blog about trend 7&8, read back? Click here! A blockchain can be compared to a ledger that is not stored centrally, but spread over all participants. Just as in a ledger, transactions are recorded in columns and rows, blockchain records transactions in data blocks, which contain the security key of the previous block in addition to the transaction data. Because the key of one block becomes part of the next block, a chain of blocks is created, namely a blockchain. This chain is distributed in a peer-to-peer network, which means that participants communicate with each other without the intervention of third parties. In this network, the participants ensure the validation of transactions. Once captured, that data is (generally) immutable, this is because everyone in the network has complete information and a change of data would be noticeable. The encryption of data is based on cryptography, which uses difficult to decipher codes. In addition, participants have the opportunity to hide or not hide their identity with pseudonyms – an alias or pseudonym. In this way, only those who know the user can also recognize them in the chain. For example, consider a (private) application within an organization where participants can be recognized by their employee number. At the same time, with this anonymity, blockchain offers an interesting platform for the black market, which can do its thing publicly but anonymously

The potential of blockchain can be seen, for example, in the notary sector. Originally, the notary maintains the overview of home ownership, but with the help of blockchain technology, homeowners can manage their real estate directly and in real time. Through a blockchain-based platform, homeowners can hand over ownership of real estate, with the other participants of the platform validating whether that transfer of ownership can take place. With this, blockchain no longer makes it necessary for a notary to monitor and supervise the transfer of ownership as a third party.

With the launch of a new protocol for a crypto currency called Bitcoin the concept of blockchain was introduced to the general public. In the past ten years, awareness of blockchain technology has grown significantly. In the United States, investments in blockchain start-ups have grown from $93 million to $550 million in 2016. These investments are expected to exceed $23 billion worldwide, as shown in Figure 1. Organizations have experimented extensively and with that built an understanding of the technology, including its implications. Experts expect that organizations driven by blockchain technology will transform towards further integration in the coming years. They will also focus more on privacy and data management policies. The main reasons for these organizations to start working with blockchain are cost reduction, traceability and transparency. figure 1. Global Blockchain Investments (in billions of US$) (Source: Statistics, 2018) 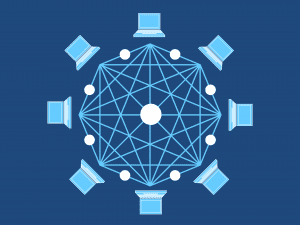 Blockchain: Should I Stay or Should I Go?

Can't wait for the full Trends Survey and do you want to read more about blockchain?

In a world where computers are increasingly becoming part of society, they are also increasingly taking over work. Because robots are actually computers that perform a certain task, Robotic Process Automation (RPA) is a clear example of this development. When properly programmed, it can have great benefits and work many times faster and better than humans can. It is one of the recent developments in which the latest technologies are applied to increase the efficiency of processes. In fact, this is perhaps the most accessible trend of the Supply Value IT Trend Survey. Supply Value CEO Menno van Drunen says the following about this: ''RPA is fairly unknown, while organizations can realize a lot of benefits for low investments. RPA may be less hip, but certainly no less valuable.” Despite the low-threshold applicability, almost 75% of the respondents indicated that they were completely unfamiliar or only somewhat familiar with RPA. By means of Robotic Process Automation human actions within software applications can be simulated without the software itself having to be modified for this. The employee is supported because repetitive tasks are taken care of by a script with multifunctional macros based on rules. So there is talk of a 'software robot' that logs into a system and simulates the operation of the mouse and keyboard. In general, RPA is therefore especially suitable for processes with a high volume and a repetitive character. Think, for example, of recurring administrative actions, or the retyping of data between two different IT systems. The robot can act completely in the background or under the control of an employee.

RPA offers organizations the opportunity to let their employees perform more meaningful tasks. Relieving them of repetitive, often administrative tasks, creates space to organize the work in a more meaningful and challenging way. Skeptics say that only jobs will disappear, but in addition to alleviating the administrative burden on employees, the quality of work can also be increased. Robots act on the basis of human-defined rules, and if these rules are set up correctly, the margin of error disappears. In addition, the robots are available 24/7 to perform tasks, so certain activities can also continue at night. This offers advantages at peak times because the robot can perform a high volume of work and often work 3x faster than a human can. Companies such as KPN are at the forefront of the application of this development, and have already been able to make major efficiency gains with this. IT Trends research - Internet of Things
Scroll to top